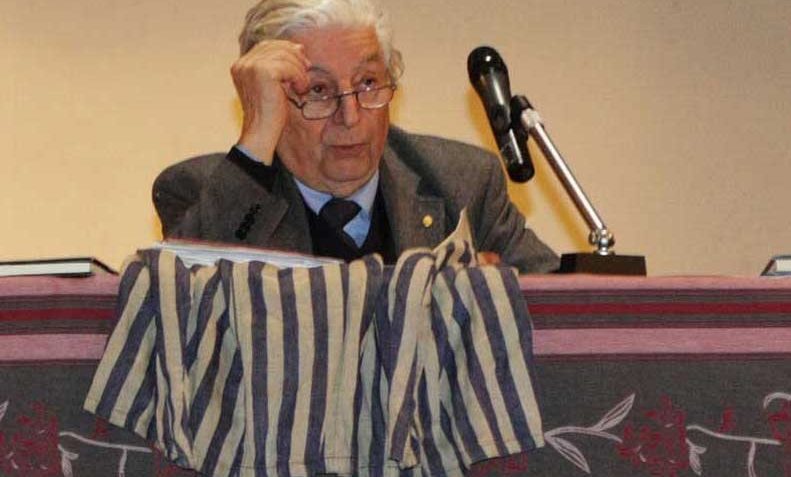 On 2007, Nedo Fiano, a member of our Lodge Nathan e Anna Cassuto in Milan and President between the years 1992-1994, was awarded the title of “Officer” by the President of the Republic who signed his appointment at the end of March. The name of Nedo Fiano appears in the Official Register at no. 3501 V series.

On the 7th of December 2008 he received the Ambrogino d’oro, awarded by the Municipality of Milan. On May 22, 2010 in Pontremoli he received the Bancarellino Award, for the book The past returns (Editrice Monti).

Born in Florence, after the promulgation of fascist racial laws in 1938, he had to leave school at 13 because of Jewish religion. He continued his studies at a small school organized independently within the Florentine Jewish community.

On February 6, 1944, at the age of 18, the Fascist police arrested him in Florence and locked him in the city jail for being Jewish. Later he was transferred to the Fossoli transit camp, together with eleven other members of his family.

On May 16, 1944, he was deported, along with all his arrested family members, to the Auschwitz concentration camp.

On April 11, 1945, he was freed by allied forces in the Buchenwald concentration camp, where he had been transferred by the fleeing Nazis, the only survivor of his family.

Nedo get married on 30 October 1949 with Rina Lattes “Rirì” and, they had three children Enzo, Andrea and Emanuele.

The  family moved to Milan where Fiano had found a job in the textile industry. In 1963, he decided to enroll at Bocconi University in Milan. Despite his family and work commitments, he graduated in 1968, turning his career and life into a marketing company.

Shortly thereafter, he will begin to bring his testimony around Italy tirelessly going to Italian schools and by participating in different debates about Holocaust for many years.

In 1997 he was among the witnesses of the documentary film Memoria presented at the Berlin Film Festival.

In 2003 he published the book A 5405. The courage to live, in which he recounted his experience as a deportee.

He was one of Roberto Benigni’s consultants in the film Life is beautiful; he has appeared in numerous popular television programs and has taken part in many documentaries, among which I just wanted to live by Mimmo Calopresti, A train for Auschwitz by Bruno Capuana, A Any Day by Hendrick Wijmans.

The experience of deportation caused him to lose his family and a painful memory. Italy and Germany were subject to Hitler’s power, for this reason Fiano considers democracy, or the power of the people, an indispensable asset. His hopes are aimed especially at young people, carrying forward the memory of the facts, of suffering, of errors and of alienation.

During his story about Auschwitz, Fiano always links all situations to two important elements: the mother and the train. Speaking of his mother, he compares himself to Primo Levi who, after surviving the extermination, returns to Turin and finds his mother waiting for him on the stairs. Nedo, unlike Primo Levi, lost his mother from the very beginning, when he passed the gates of Auschwitz. When freedom came he was dying in the shack where he had stayed since the first day of internment.