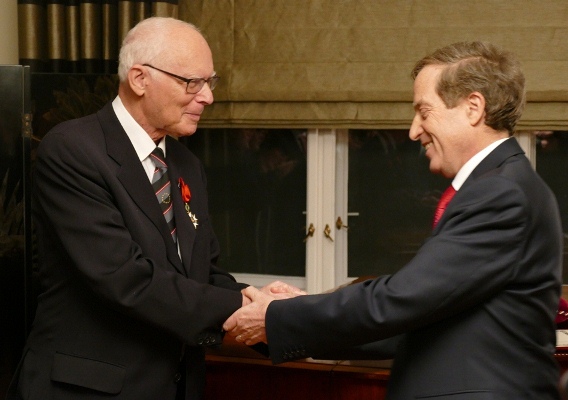 Juraj Alner was honored as “Officer de la Legion d´Honneur” for his European commitment and willingness to defend the values of democracy and human rights.

In 2007 Juraj Alner was also honored with a silver medal of the President of Slovak Republic Michal Kováč for his contribution to the development of Slovak journalism.

Juraj was born on July 23, 1937 in Kladno in the family of a textile engineer; however, after a short period of time his family moved to Ružomberok where Juraj’s grandfather led a textile factory. He was raised in a tolerant and multilingual environment, though his father died when he was only four years old.

As he was raised in accordance with Christian religion, he didn’t realize his Jewish origin when he was a child. Since Juraj’s grandfather was one of the best experts in the factory, he was allowed to ask for a dispensation during the Second World War and this way he saved his family from the first wave of deportations from Slovakia in 1942. Two years later, German army started to occupy Slovakia and thus the only chance to survive was to escape.

Juraj and his family were forced to hide out on various places in Central Slovakia till the liberation of Czechoslovakia. After the end of war he didn’t return back to the town where he had spent his entire childhood. His family stayed in Ružomberok for some time, but later they moved to Žilina and then to Bratislava where Juraj’s stepfather got a job as a woodworker in Ligno, the company for foreign wood trade.

They experienced the results of the Communist Party governance soon and with all its hardness – his stepfather was arrested and sentenced to many years of imprisonment. In spite of all the troubles, Juraj managed to enrol at the university where he received a higher education; however, as he was present at the protest march of students, he was assigned to manufacture after finishing school to “familiarize him with the working class”. He worked as an auxiliary worker in Fatra Company in the town of Krupina. After finishing his six-month military service in Čáslav, he got a job as a teacher in Krupina at first and subsequently in Banská Bystrica.

In the 1960s he began to work at the editorial board of the daily paper Ľud in Bratislava and he also engaged in the political Party of Slovak Revival. After the invasion of the Warsaw Pact troops in August 1968, Juraj was forced to immigrate to the USA, but later he returned back because of his family. He lost his job and thus he had to work as a manual worker in the printing office where he spent seven years. Under weird circumstances he got a job as a librarian at the Academy of Music and Dramatic Arts (VŠMU) in the late 1970s.

However, only after the fall of communism he got his former position in the daily paper Ľud where he acted as an editor in chief since the year 1990.