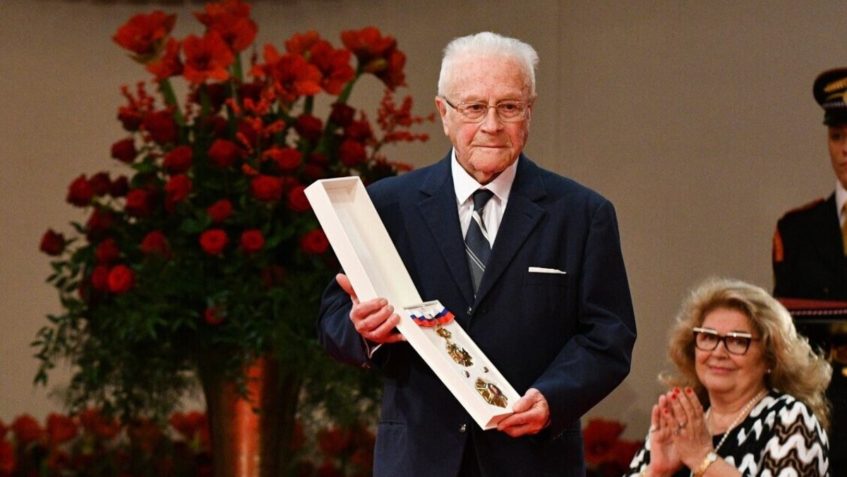 Brother Otto Šimko was honoured by the President of the Slovak Republic “for the merit of democracy and for the protection of human rights and liberties”.

Otto Šimko was born on June 1, 1924 in Topoľčany in a family of a respected attorney, later on a judge. Majority of his childhood he spent in Nitra. Otto doesn´t remember expressions of antisemitism from the pre-war era, however, the turning point occurred after the Slovak State in 1939 was established. The regime forbade him to continue in his studies. He wasn´t allowed to graduate and thus was apprenticed as a bookbinder. On September 1, 1942 his family, except his father who was imprisoned in Ilava, was transported into the concentration center in Žilina. His uncle saved them from the fatal journey to the Nazi labor camp by proving them all with fake baptism certificates. Thanks to these documents they were transferred to the labor camp in Vyhne, where they spent ten months until their father was granted a resort dispensation from the former Minister of Justice Gejza Fritz. Otto managed to obtain counterfeit Aryan documents and through a newspaper advertisement he found a job of a bookbinder in Hlaviš company in Liptovský Mikuláš. Here in August 1944 broke out the Slovak National Uprising and Otto actively joined it as a member of the 9th Liptov Partisan Division. By the end of 1944 he was arrested and he had to suffer from series of brutal interrogations in the prison. He avoided the deportation just thanks to a lucky chance. He outlasted the liberation by the Red Army in hidings in Nitra. Experiences of war deeply influenced his attitude towards the communist party, which he joined yet when being a partisan. After the end of war he moved to Bratislava, where in 1949 he graduated in law at the Comenius University. After gaining the diploma he got employed at the Commission of Social Affairs. However, he gradually began to realize that his idealized visions of the communist regime were only his illusion. During the era of fabricated trials he as a Jew and a politically unreliable person was deprived of his function and relegated to manufacture. He worked as a lathe operator in Martin and later as a teacher in a home for apprentices. In 1954 he started working in offices of Smena daily in Bratislava, where he worked in the labor and foreign departments. He was able to return to his profession of a lawyer yet after many years, in times of Party screenings, when he was fired from the editorial office in 1971. He gained a position of a company lawyer in a construction company in Bratislava, where he worked until leaving to retirement.